Dondi describes itself as a “decentralized crowdfunding platform” and a “marketing platform powered by revolutionary smart contract technology”. You pay to join the system, then make money by convincing other people to join.

Is Dondi a scam? How does Dondi work? Can you make money by joining Dondi? Find out everything you need to know about this blockchain-based platform today in our review.

Dondi is a marketing platform that uses smart contracts, ERC-20 tokens, and the Ethereum blockchain to create a self-running multi-level marketing (MLM) system.

“Dondi is an international 100% Decentralized Peer 2 Peer Crowdfunding platform based on Ethereum smart contracts. It is a self-executing software algorithm that performs the function of distributing partnership rewards between members of a community while adhering to specific conditions (matrix marketing plan).”

That’s a fancy way of saying “we built an MLM scheme on the Ethereum blockchain”.

Found online at Dondi.io, the platform uses an X3 and X6 partner matrix commission payout system to distribute funds to members. Similar to a traditional multilevel marketing program, you pay a fee to join, and that fee gets passed to someone above you. To make money with Dondi, you need to convince other people to join (and pay the fee) within your matrix.

It costs 0.05 ETH ($24 USD) to join Dondi, although you can pay more to join at a higher level and make more money. 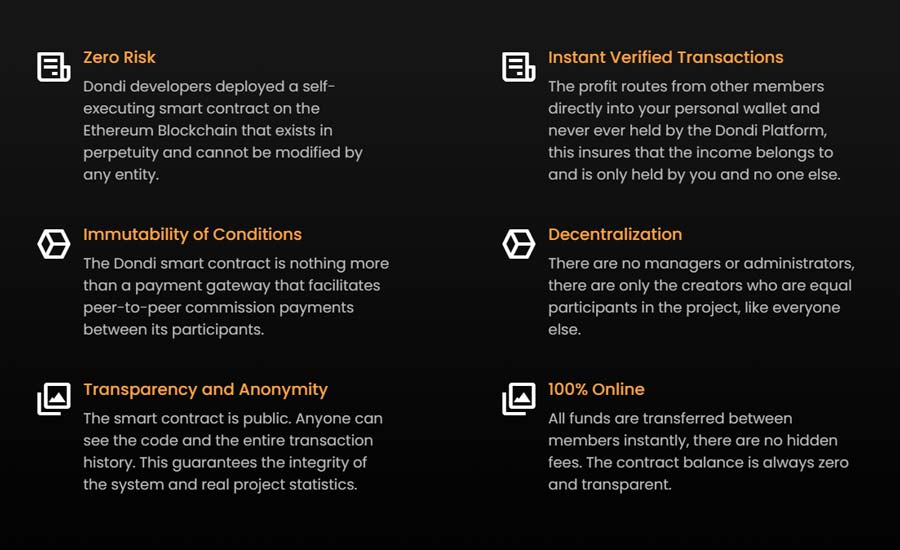 The Dondi.io official website throws around a lot of words about blockchain technology and cryptocurrency, although the website provides little information about how Dondi works or who’s involved. The company claims to offer “zero risk”, for example, and full “transparency and anonymity”, yet the company never discloses who created the Dondi smart contract.

Let’s take a closer look at how Dondi works.

How Does Dondi Work?

Here’s how Dondi describes the importance of the Ethereum blockchain for transparency:

“The code for the contract is in the public domain. Transaction information can always be viewed at the link etherchain.org… The Dondi Platform consists of self-executing transactions, which do not permit anyone to interfere with the course of these transactions.”

Specifically, Dondi uses an X3 and X6 matrix system to distribute funds. You pay to join Dondi, and your membership fee is sent to higher-level members within the Dondi network based on the rules outlined in the smart contracts. To make money with Dondi, you convince other people to join the network. You receive a portion of each referral’s membership fee, while the remaining fee gets sent to higher levels of the Dondi network.

You automatically join level one of the X3 and X6 matrixes upon registering for Dondi (sending your membership fee to the smart contract). 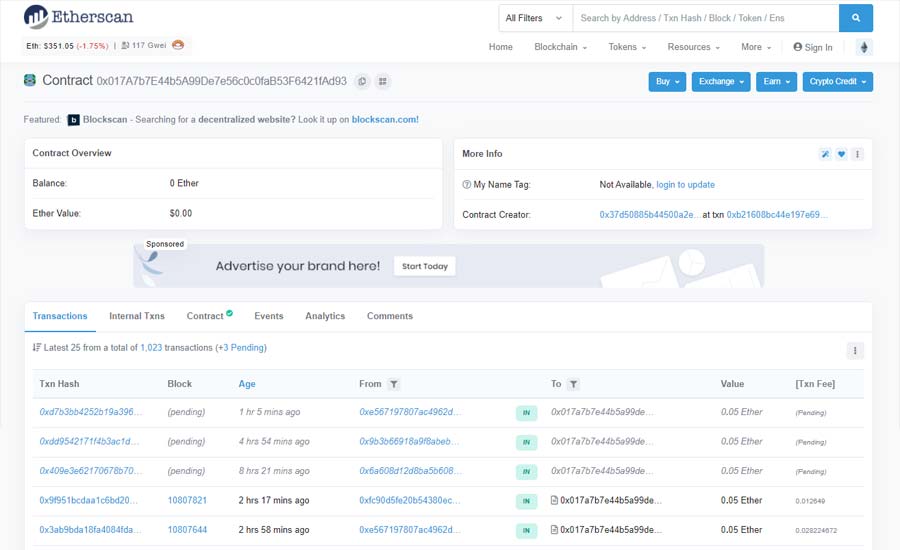 Zero Risk: Dondi claims there’s zero risk to its multilevel marketing system because their “self-executing smart contract…exists in perpetuity and cannot be modified by any entity”.

Transparent and Anonymous: Dondi’s smart contract is publicly viewable on the Ethereum blockchain, and anyone can check the smart contract to see incoming transactions and the code that distributes payments.

Decentralized: Dondi’s smart contract is decentralized, and the company claims there’s no centralized entity in charge of any aspect of the platform.

It’s unclear when the Dondi ERC-20 token will launch – if ever.

However, any users that register to Dondi before the ERC-20 token release will receive 50% of all governance tokens.

We assume the remaining 50% of governance tokens go towards the Dondi founding team, which is an absurdly high ownership share compared to other crypto projects.

Dondi claims they will make a maximum supply of 50,000 Dondi tokens. 100% of all tokens will be available in the circulating supply and no tokens will be locked up.

Dondi plans to launch the tokens on decentralized and centralized exchanges.

How Many Members Does Dondi Have?

As of September 2020, Dondi claims to have 110 participants. The company also claims these members have earned thousands of dollars.

Here are the stats according to the official Dondi website:

Just like with other multilevel marketing schemes, Dondi charges a fee to join. You must pay this fee to join Dondi. Your fee gets passed through the smart contract to other members of the Dondi network, including the person who referred you.

After registering and paying your fee, you are automatically entered into level 1 of the X3 and X6 matrixes.

You must have a referral from an existing member to join Dondi. You cannot simply pay a fee to join: you must receive a referral code from a current member.

It appears you can pay a higher membership fee (say, 0.4 ETH or $192 USD) to join at a higher level, as the Dondi smart contract has multiple transactions of 0.4 ETH. However, these membership details are not disclosed upfront.

The makers of Dondi do not disclose their identities. Here’s how Dondi.io vaguely describes its team members:

“The Dondi concept belongs to a group of crypto enthusiasts, who are members of the community and do not have any special privileges. Today, Dondi is a peer-to-peer community of platform members, to whom the platform itself belongs.”

We checked the WHOIS data of the Dondi.io domain. Dondi.io was created on July 8, 2020 using NameCheap as a registrar. The team used Whois Guard to protect their identities when registering the domain.

Beyond that, there’s no information about who’s behind Dondi.io or how to contact the company. As with other crypto MLM projects, Dondi.io’s team wants to stay anonymous. That team does not claim to have any special power or administrator privileges over the network.

Dondi’s team claims to have built the protocol throughout 2018 and 2019, launching online in July 2020. In the coming months, Dondi wants to launch an iOS and Android mobile app, ERC-20 Dondi tokens, UniSwap listings, and more.

Dondi.io appears to be a scam. At the very least, Dondi is a pyramid scheme with no legitimate product, service, or business. The website vaguely tosses around crypto terms and blockchain information without telling us anything about the project.

Dondi has no transparency about who’s running it, where they are based, or how the distribution structure works.

We also know that Dondi.io was registered in July 2020, although the company claims to have been actively developing the platform since September 2018.

Making things look worse for Dondi.io is the fact that you need to pay to join the scheme. You pay 0.05 ETH to join the network, and this fee goes towards nothing but commision. Your joining fee gets distributed to higher-level members of Dondi, and you make money by convincing other people to join underneath you and pay the fee.

Overall, Dondi.io seems like a classic pyramid scheme or multilevel marketing scheme. We can find no evidence whatsoever that Dondi has any type of legitimate business, product, or service – it’s just a basic pyramid scheme built on an Ethereum smart contract.

Dondi, found online at Dondi.io, is an Ethereum smart contract that distributes membership fees across multiple tiers. You pay a fee (0.05 ETH or $24 USD) to join the network, then make money by convincing other people to join Dondi using your referral code.

As far as we can tell, Dondi is a basic pyramid scheme with no product, service, or business model. Your membership fee is distributed to other Dondi members via the Ethereum smart contract, and the goal is to build and hype the platform until it inevitably collapses.

To learn more about Dondi and how it works, visit online today at Dondi.io.