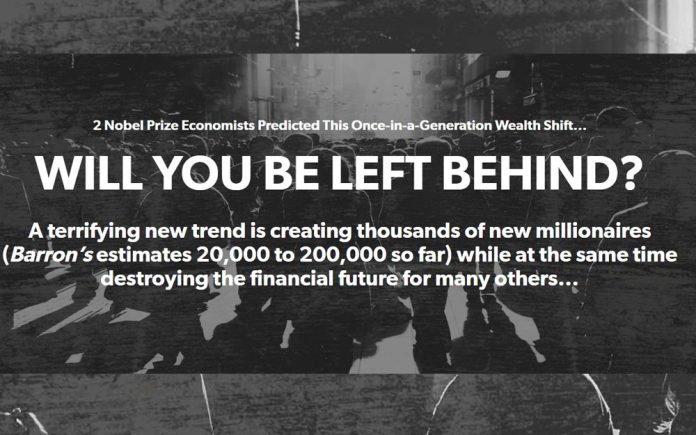 For those of our readers who may not be aware, Stansberry Research is an investment research firm that produces a number of educational newsletters and guides that are designed to educate investors about a whole host of novel economic avenues that one can use to maximize their returns. The firm is based out of Baltimore and since 2017 has been helping people invest in Bitcoin as well as a host of other crypto and blockchain-based offerings.

Many of Stansberry Research’s recent offerings — such as the Bitcoin and Blockchain Quick-Start Guide and Block-Wave Investment Guide — seek to help crypto enthusiasts navigate this burgeoning domain by arming them with hard facts and data that can allow them to optimize their investment strategies as well as diversify their portfolios so as to weather any situation that the market may put forth in front of them.

Let's review Porter Stansberry's latest report about the Digerati, (new class of digital millionaires and billionaires, aka ‘the people who have been getting rich while most Americans are left far behind' or the richest and most well-connected business people in the world), and why why the “Digerati” are starting to drop dollars and other assets for digital currencies based on blockchain distributed ledger technology, starting with bitcoin (BTC).

While most people only know about Bitcoin because of its amazing surge to around the $20,000 mark a couple of years back, what people tend to often miss out on is the fact that the digital asset has been slowly transforming the global economic landscape in a slow yet steady manner. Due to its deflationary design, a whole host of experts predict the flagship crypto asset to surge past the $100k per coin mark within the next decade or so.

Not only that, there are some economists who have gone as far as saying that it would not be surprising to see the currency break the one million dollar threshold by the end of 2030.

From a more technical standpoint, it is worth understanding that Bitcoin is essentially a piece of coded data, which when uncovered, allows miners to receive BTC tokens as rewards for their efforts. And while a lot of people today make accusations about how Bitcoin and other digital currencies are being used to launder money as well as facilitate other criminal activities, a whole host of studies released over the past decade have shown that fiat currencies still account for a massive portion of all criminal activities taking place worldwide.

Key Facets Regarding Bitcoin as Highlighted by Stansberry Research

(i) Pseudonymous, not anonymous: A common misconception that is commonly associated with Bitcoin and other popular cryptocurrencies is that they are totally anonymous and thus perfect for facilitating illegal activities. However, it is worth remembering that BTC is pseudonymous, not anonymous. What this means is that even though one’s name is not attached to an individual BTC-based transaction, each and every tx related to this novel currency is duly noted and recorded on a ledger that anyone can access (24/7).

(ii) Store of Value: Much like gold, Bitcoin has been touted as being a legitimate long term store of value. This is because of its intrinsic design — i.e. there is a finite amount of Bitcoin that can ever be sourced. However, many critics have often referred to crypto as having no value because it is not backed by anything. And while that outlook may be true to a certain degree, it is also worth remembering that government-issued fiat money is also not backed by any solid commodity and thus can be criticized in the same way.

(iii) Instant Monetary Transactions: Unlike payment services such as PayPal, SWIFT that are not only expensive to use but also quite slow in their operational capacity, crypto-based monetary transfers are almost instantaneous. Not only that, the costs involved are quite minuscule when compared to traditional routes.

A Closer Look at the Bitcoin and Blockchain Quick Start Guide

As the name seems to clearly suggest, Stansberry Research Bitcoin and Blockchain Quick-Start Guide is a compendium of sorts that contains a wide array of insightful data in relation to Bitcoin as well as blockchain technology. And while the guide is only twenty-four pages in length, it helps provide users with a whole host of insightful data such as:

According to the official company website, the folks over at Stansberry Research have recruited a number of experts who have worked for three of the most famous hedge fund managers in America — namely Steve Cohen of SAC Capital, George Soros, and Julian Robertson. Not only that, but the firm has also consulted individuals from diverse fields such as bioinformatics, infotech, and pharma.

A Detailed Look at The Block-Wave Investor's Guide.

In addition to the guide mentioned above, Stansberry Research is also offering its users with another book called the Block-Wave Investor's Guide which seeks to educate readers about the newest blockchain innovations that can help maximize one’s profits within the shortest period of time.

The folks at Stansberry claim that by following the investment data provided in their journal, users will be provided with an opportunity to invest in several publicly-traded companies that are sure to deliver humongous returns. Not only that, the Block-Wave Guide also comes laden with a whole host of interesting data pertaining to various blockchain ETFs that are expected to surge in value by the end of 2020.

Probably the company’s most widely read offering, the Stansberry Innovations Report is a monthly financial periodical that contains a wide array of thoroughly researched data that can be used by investors to help explore various traditional as well as budding market sectors in a manner that involves the minimum amount of risk possible.

As things stand, latest iterations of the report are laying extra importance on the crypto market, mainly because more and more investors around the globe have started to recognize the insane potential of this burgeoning economic space.

Pricing+Availability and Other Important Details

At the time of writing this article, all three of the aforementioned reports are available for a discounted rate of $49. However, it bears mentioning that this offer is available for a limited time period only — since normally these three offerings combined are worth $199.

To place an order, all one has to do is visit the official company website and click on the ‘order now’ link. Following this, users will be navigated to the payments page where they can choose to facilitate their purchase using a whole host of safe and secure avenues including AMEX, Mastercard, Visa and PayPal.

Additionally, it is important for our readers to remember that subscriptions to the Stansberry Innovations Report are subject to automatic renewals unless explicitly canceled. According to the official product website, every time a renewal is initiated, users are charged with $199 (plus applicable taxes). Subscriptions can be canceled at any time by contacting Stansberry’s Customer Service team at 1-888-261-2693.

In case of any doubts or queries regarding any of the aforementioned offerings, users can call on the following number (888) 261-2693 during weekdays (between 9 am – 5 pm EST) or send over an email at info@stansberrycustomerservice.com.