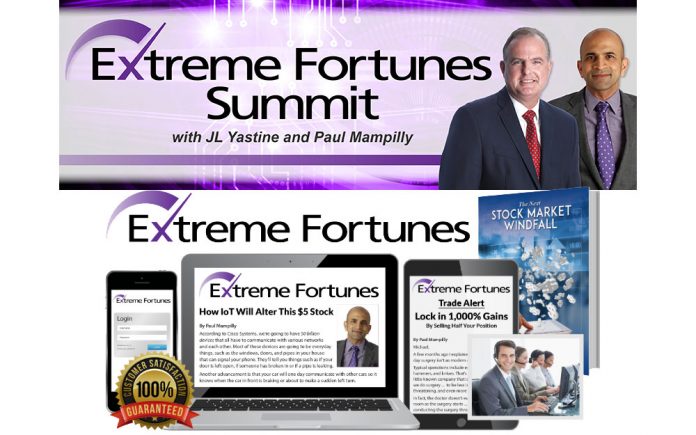 Did you recently come across a presentation dubbed, “Extreme Fortunes Summit with JL Yastine and Paul Mampilly?” If so, you might have been quick to assume that the duo is planning a webinar to disclose some crucial piece of information regarding an investment. This, however, is not the case.

The Extreme Fortunes Summit is simply a conversation between investors Paul Mampilly and JL Yastine, where the latter asks questions regarding the former’s approaches to investments. In fact, it advertises a service called, Extreme Fortunes led by Mampilly himself. Instead of picking illiquid, volatile and doubtful stocks, the expert affirms that his approaches are surely to lead to triple and even quadruple profits.

Moreover, he has since shared that he spent 13,000 hours scanning real-time market data, only to find up to 43 stocks with one feature in common: all have high profit-generating potentials.

Want in on the secrets? Here’s what you should bear in mind:

What is Extreme Fortunes?

Extreme Fortunes is Paul Mampilly’s upgraded financial newsletter that covers small cap investment opportunities. As per the claims made, instead of abiding by the “buy-and-hold” strategy of growing wealth, Mampilly looks closely at investments that are ready to explode, hence.

What will I learn from the Extreme Fortunes?

Throughout the Extreme Fortunes membership, Mampilly will discuss, in great depth, a number of breakthroughs that he discovered. Here’s a look at what investors will come to learn:

If you thought that’s all there is to learn, this is just the beginning. Mampilly will also share a report he calls, “The Next Stock Market Windfall,” which covers five of his top picks.

Next comes his monthly alerts. Through this, Mampilly promises to issue one brand-new alert with a total of 12 for the year. Details regarding what the stock is, what price one should buy and sell at, the industry that it falls under, revenue history, and how each investment satisfies his strategy will be covered.

Weekly flash alerts, where Mampilly will record himself making comments on the market

The Extreme Fortunes Portfolio including all of Mampilly’s recommendations

A $100,000 guarantee: if members weren’t able to make $100,000 using Mampilly’s methods in the first year, he will offer a second year of subscription at no cost.

What strategy will Mampilly cover throughout the Extreme Fortunes subscription?

According to the claims made, Mampilly’s strategy entails three phases. The first is called disruption analysis, which involves finding companies deemed “industry disruptors.”

The second phase is what he calls, “the number crunching phase.” At this point, his strategy focuses more so on the basics, i.e. the finances. Some of the facets he dives into here include the stock price, volatility, market cap, and sales growth to name the least.

Finally comes the third phase, which entails insider activity. Rather than focusing on every move made by Wall Street, Mampilly will focus more so on what the insiders, i.e. CEO or COO are up to. More specifically, he claims to look closer at the rate at which insider buying and selling occurs. He believes that if the executives of the company don’t hold their own shares, he sees no reason in doing so.

How much does the Extreme Fortunes membership cost?

Typically, the Extreme Fortunes membership comes out to USD$5,000 per year. However, for the first 1,000 charter members, he wants to offer the same perks for only USD$2,995. That said, it is unclear as to whether the years thereafter will be priced the same or if it will go back to the original price. This is something that needs to be brought to the attention of the customer service team by calling +1 (877) 422-1888 or filling out a form here.

What are current members of Extreme Fortunes saying?

Based on former and/or current members who took to Stock Gumshoe to share their experiences, this service is equivalent to 2.8 out of 5 stars, which is slightly under average. Most members appear to have been content with the quality of analyses followed by the investment performance, however, many don’t seem to be thrilled by the value for price.

The key takeaways expressed include some positive gains but not many that have reached 1000%, an average holding period of 300 days and gains of 16.76%, possible use of ‘pump and dump’ strategy, and the fact that Mampilly switches between many services. All that being said, the aforementioned sentiments were expressed between early and late 2019, so things might have turned for the better or worse this year.

Extreme Fortunes seems like a financial newsletter for those who prefer to invest in small cap stocks and have a starting capital of $10,000. Led by Mampilly, who is widely known for the success rate of his investment newsletter, Profits Unlimited, he carries well over 25 years of experience in this field. Having started his career in 1991 as an assistant portfolio manager, he quickly grew to manage hedge funds. As shared on the official website, he at some point was able to turn $1.3 billion to $5.8 billion.

Hence, it is clear that he has the experience to serve as an editor of such newsletters. When it comes to its overall affordability, it is slightly on the higher end, especially considering the fact that the membership originally cost $5,000. However, this service is an upgrade whereas Profits Unlimited was an entry level newsletter, so such a surge should be expected.

It is crucial to note that Extreme Fortunes is only one of six newsletters under his belt. This seems to be a problem among existing members, as most felt he spent less time on each, forcing the overall performance to drop than initially expected. Obviously, statements affirming 1000% gains seem unreasonable and unlikely, and this might give rise to frustration, as there are no refunds allowed.

Given that Mampilly is generally seen as a successful editor and that most of the sentiments expressed are somewhat outdated, it might not hurt to give it a try, as things may have significantly changed in 2020. Ultimately, individuals are recommended to contact customer service regarding any doubts and/or concerns prior to going all in.

To find out more about Mampilly’s Extreme Fortunes, click here.